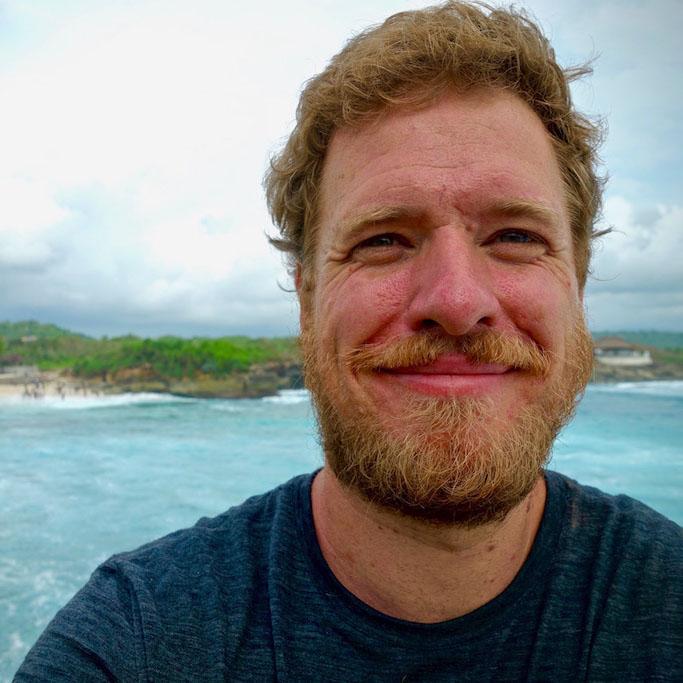 For the past 15+ years, I’ve been a software engineer turned entrepreneur. However, in the past 7 months, I’ve shifted my focus to making videos at the intersection of adventure, travel, and technology. My first video How I Made My Own iPhone - in China has been watched by over 7.5 million people, and I’m currently working on the next one.

I’ve been without an established apartment I rent full time for the past 3 years.

I’m mostly a slow moving nomad, with bursts of fast. My ideal pace is to move locations every month or two, but there are occasionally periods where I’ll move as fast as every week. This is usually spurred on by trying to meet up with non-nomads that are on vacation and have less time to travel, and are thus moving more quickly. Too much of that though, and I get really burned out. Moving more slowly allows me to feel more grounded, develop routines, and spend time working on in depth projects.

When people ask where I’m from, I like to say that the two centers of my orbit are San Francisco and Shenzhen, China. They’re the only two cities where I store stuff even when I’m not there.

I used to say that I spent 50% of my time in San Francisco, where I lived for 10 years prior to becoming nomadic, in an effort to maintain my friendships and connections to the tech scene there. I’m also a member at the Noisebridge Hackerspace in SF, and fly my hang glider a lot when I’m there.

However, gradually over the past 2 years, I’ve been spending more and more time in Shenzhen, China, to the point that I think I’ve spent close to 50% of the past 12 months there. I came to explore the electronics manufacturing scene there, and immediately fell in love.

The rest of my time, I travel mostly in SE Asia, but also short stints in Europe.

The freedom to be where I want, when I want. I love being able to choose my location based on the season, how I want to spend my time, where my friends are, or just on a whim. And if I get tired of being on constantly on the move, I just slow down and put some roots down somewhere for a while. If I get bored or tired of a place, I have the freedom to just pick up and move on to the next adventure. This also means I can choose my locations based on what’s most conducive to what I want to accomplish. Shenzhen is hands down the best place to make electronics, so I go there when I have a good idea. Sitting on a beach in Bali is a great place for heads down grinding out a piece of creative work, such as editing a big video. And San Francisco is great for making connections and keeping a finger on the pulse of the tech community. I also the freedom to spend as much time with family and friends as I like, which is really nice.

Logistics. Plane tickets have to be found and bought. Picking a hotel, or AirBnB, or sublet apartment is time consuming, particularly if you’re going to be there a while and want to find something comfortable yet affordable. I have gotten much more proficient at it over the past three years, both in general tools and approaches, but also in specific knowledge about places I visit often.

But also the simple, mundane things can add up. Where can I do laundry? How do I get a reliable internet connection? Where is a reasonable grocery store? Sometimes these things are easy, sometimes they can be soul crushingly hard. But usually there just an added thing to think about, on top of whatever else is going on in my life.

Ironically, San Francisco remains one of the most challenging cities for me, due to the severe lack of housing supply, and the commensurate sky high prices. My normal avenues like AirBnB and hotels are very cost prohibitive, so often I have to be a bit more creative in finding medium term housing.

I also get really annoyed by having to plan too far in advance. Ideally, I’d have to plan no more than a day in advance so I could just go when the mood strikes me. In some parts of the world, this is easy to do. In others it’s much harder, or simply cost prohibitive.

This is a tough one - there’s too many to choose from. A couple that jump to mind involve dealing with serious medical emergencies (both mine and friends I was traveling with) in decidedly out of the way places, but I’ll leave those for another day.

Honestly, the past couple months have been a pretty crazy adventure leading up to releasing the video about how I made my own iPhone, and riding the incredible wave of response that’s followed. I’ve been interviewed on TV all over the world, had hundreds of people contact me with all sorts of offers, questions, and suggestions, and now regularly get recognized on the street here in China. All from one video.

I’m currently in Shenzhen, finishing my next video. Once that’s released, I’ll likely pop back to the States for a bit of hang gliding and catching up with friends, before heading off somewhere new to shoot more videos.